Explore The Udaipur City With Our Interactive Map!

Dubbed “the most romantic spot on the continent of India” by British administrator James Tod, Udaipur is a tourist destination and is known for its history, culture, scenic locations, and the Rajput-era palaces. It is popularly known as the “City of Lakes” because of its sophisticated lake system. It has seven lakes surrounding the city. Five of the major lakes, namely Fateh Sagar Lake, Lake Pichola, Swaroop Sagar Lake, Rangsagar and Doodh Talai Lake have been included under the restoration project of the National Lake Conservation Plan (NLCP) of the Government of India. Besides lakes, Udaipur is also known for its historic forts and palaces, museums, galleries, natural locations and gardens, architectural temples, as well as traditional fairs, festivals, and structures.

Udaipur, formerly the capital of the Mewar Kingdom, is a city in the western Indian state of Rajasthan. Founded by Maharana Udai Singh II in 1559, it’s set around a series of artificial lakes and is known for its lavish royal residences. City Palace, overlooking Lake Pichola, is a monumental complex of 11 palaces, courtyards and gardens, famed for its intricate peacock mosaics.

The city of Udaipur is located in Rajasthan, a state in the Northern part of India. The city of lakes would have joined the Thar Desert if the Aravalli Range has not separated them. Udaipur lies at the southern end of the Aravalli Range. For Udaipur, Aravalli Range is an important relief feature and it is often perceived as a frontier that separates the Thar Desert from the plains and plateaus of eastern Rajasthan. This page contains information on the geographical location of Udaipur, India. Grab more on Udaipur’s geography.

LOCATION OF UDAIPUR IN RAJASTHAN INDIA

In the language of geography, Udaipur runs from latitude 24.58 degrees in the north to longitude 73.68 degrees in the east. The city covers an area of 37 square kilometers and lies at an altitude of 598 meters above sea level. Mentioning about the geographical location of Udaipur, India, the city is sited in the southwest of Jaipur, near the border of Gujarat. Being situated in a desert area along with lakes, Udaipur usually remains sultry. Udaipur, the city of lakes lies at a comfortable distance of about 663 kilometers from Delhi, 637 kilometers from Agra, 620 kilometers from Gwalior, 797 from Mumbai and 405 kilometers from Jaipur. Udaipur is well-connected with Mumbai, Delhi, Jaipur and other cities of the country by air, rail and road. 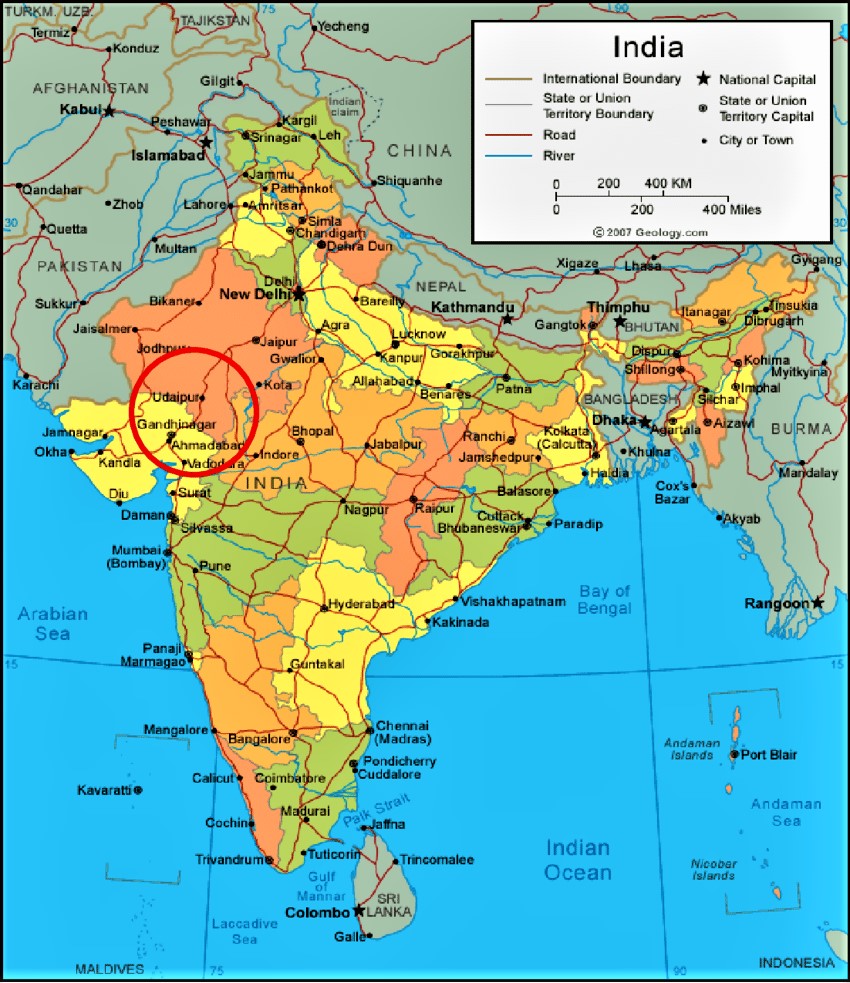